2017, University of Birmingham, Performed for BEAST FEaST. Made in conjunction with
Anne Parouty and Scott Wilson 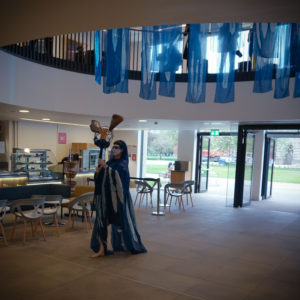 A performative response to Anne Parouty’s and Scott Wilson’s installation Kelp Road and a ceremonial signalling towards the end of the festival. Made from the shipping forecast, recordings of lighthouse fog warning signals, many of which are now silent, and remaining cyanotype prints on loan from Anne, stitched into a ritual gown.

The procession was inspired by the slow movements of the delicate kelp prints and the heavy ocean sounds of the waves crashing, cycles of the moon and methods of communication between sea farers.

The tides are a result of the Earth’s fortuitous partnership with the moon. Our planet and it’s satellite’s movements, size and proximity cause our oceans to squeeze and bulge in regular, predictable ways. These tidal forces cause the slow oscillations we know as tides, moving masses of water across the globe and setting of numerous dynamic systems from the evolution of the first organisms to the delicate balance of local ecosystems and our changing weather systems.

No one would be more aware of the moon, the tides, the weather and it’s impact on life than sailors. The shipping forecast was originally established by Robert Fitzroy after a severe storm claimed the lives of 471 seamen aboard the Royal Charter. He felt that enough information was available to predict such events and that this information should be communicated with sailors to prevent future tragedies. A series of signals and codes was devised and the first forecast was given in 1861 via telegraphs and is thought to be the first national forecasting system in the world. Storm warnings were stopped in 1866 but public outcry and the again increased loss of life saw them reinstated in 1867. Technological advances have enabled them to be broadcast 4 times daily on the radio since 1911 and they have become a cultural icon as well as a source of potentially life saving information for those without access to their own meteorological data.

Similarly lighthouses have been used to aid navigation and preserve life by communicating information about local hazards across large distances. Lighthouses have seen many technological advances – starting at first as wood or coal fires, progressing to oil lamps (vegetable or whale) now electric bulbs and LED lamps. Each lighthouse has it’s own unique signatures of light patterns, and many lighthouses also feature fog horns for warning in low visibility weather, each too with it’s own unique call. Modern technology of GPS and other on board navigational devices has lead to the decommissioning of many lighthouses and the automation of those remaining. The impact of these changes on coastal communities has been vast.

Get updates about future events

All Art
All Music
We use cookies on our website to give you the most relevant experience by remembering your preferences and repeat visits. By clicking “Accept”, you consent to the use of ALL the cookies.
Cookie settingsACCEPT
Manage consent

This website uses cookies to improve your experience while you navigate through the website. Out of these, the cookies that are categorized as necessary are stored on your browser as they are essential for the working of basic functionalities of the website. We also use third-party cookies that help us analyze and understand how you use this website. These cookies will be stored in your browser only with your consent. You also have the option to opt-out of these cookies. But opting out of some of these cookies may affect your browsing experience.
Necessary Always Enabled

Performance cookies are used to understand and analyze the key performance indexes of the website which helps in delivering a better user experience for the visitors.

Analytical cookies are used to understand how visitors interact with the website. These cookies help provide information on metrics the number of visitors, bounce rate, traffic source, etc.

Advertisement cookies are used to provide visitors with relevant ads and marketing campaigns. These cookies track visitors across websites and collect information to provide customized ads.

Other uncategorized cookies are those that are being analyzed and have not been classified into a category as yet.

SAVE & ACCEPT
Go to Top